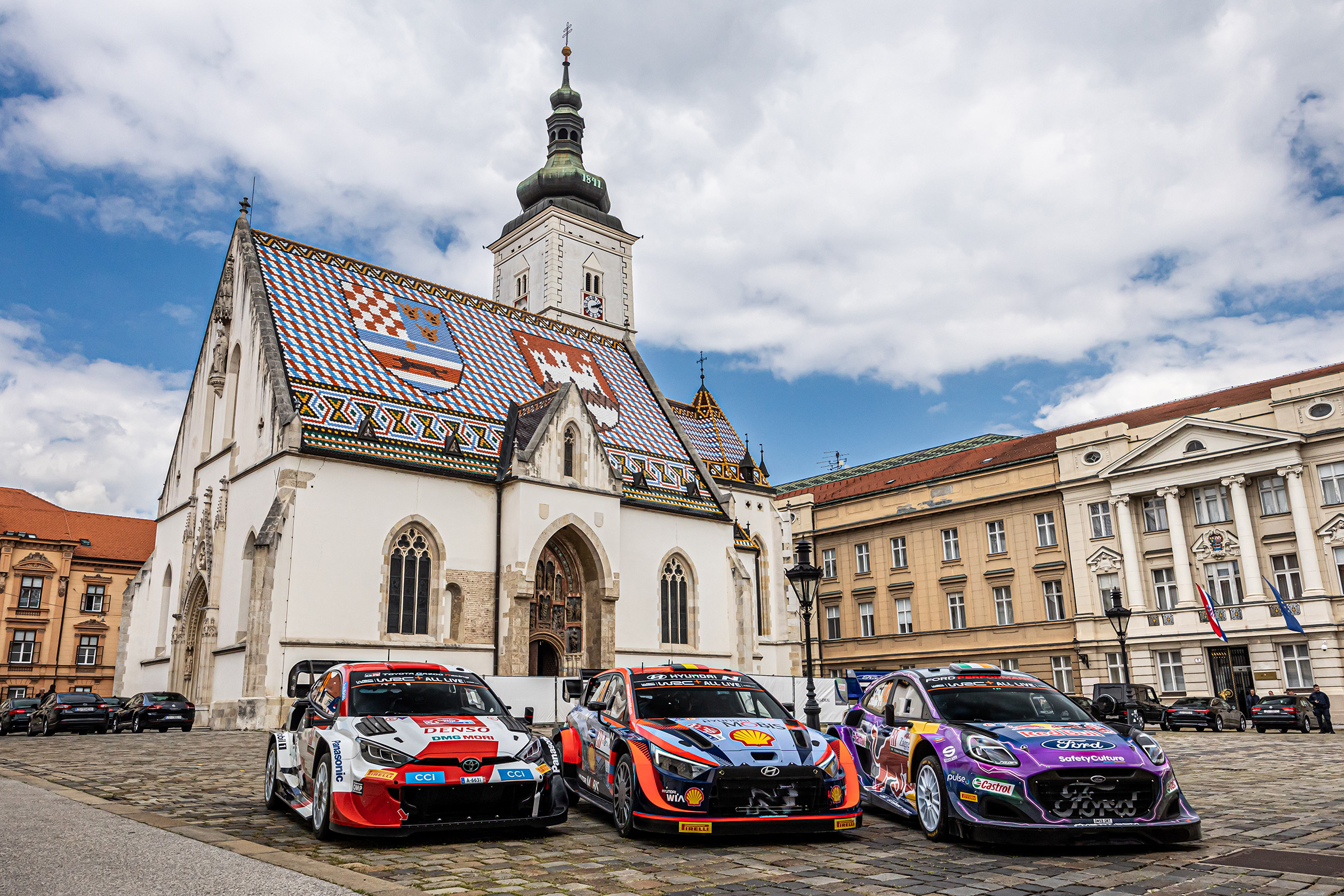 An eagerly anticipated newcomer to the WRC in 2021, the Croatia Rally retains its third-round calendar slot as the first traditional asphalt event of the year. That means the new-generation, hybrid-powered Rally1 cars will be put through their paces on stages free of ice and snow following on from January’s Rallye Monte-Carlo.

Since the season-opening event, the WRC has visited the winter wonderland of Rally Sweden in late February where Kalle Rovanperä scored his third career win to move to the top of the provisional championship standings.

Rovanperä arrived in Croatia last year aged 20 and with a four-point advantage over Thierry Neuville. However, that lead wasn’t to last after the Finn crashed out on the very first stage. Twelve months on, and having turned 21 in October, Rovanperä holds a 14-point lead ahead of his Belgian rival after the opening two rounds of the 13-event 2022 schedule.

“I feel ready and of course it’s exciting to be leading the championship, it’s the same situation as last year [before this rally] but hopefully we’ll finish Croatia a bit better,” said the Toyota GR Yaris Rally1 driver. “We are well prepared and it’s nice to have a good gap in the points even though it’s only two rallies into the season. The biggest challenge is to manage the experience gap to the guys who could do the full rally last year because we did almost the full first stage and after that we don’t have any experience. In an event like this where it seems that the conditions and the grip and the stages are quite difficult, with less experience it can be quite tricky to manage. At this point in the season I don’t feel any pressure as leader. We will try to keep our position but it’s still a long way to go.”

Who are the drivers chasing Croatia Rally glory?

Sixty-six crews appear on the entry list including seven from Croatia with the headlining Rally1 category attracting 11 registrations.

Among those are 2019 world champions Ott Tänak and Martin Järveoja from the Hyundai Shell Mobis World Rally Team plus their team-mates Thierry Neuville/Martijn Wydaeghe and Oliver Solberg/Elliott Edmondson.

Co-driven by Scott Martin, Evans has finished runner-up in the WRC for the last two seasons, but it’s been a luckless start to his 2022 bid so far.

Lappi, who is co-driven by Janne Ferm, is a Croatia Rally rookie, while Rovanperä needs no introduction as the current world championship leader alongside co-driver Jonne Halttunen. Takamoto Katsuta/Aaron Johnston complete the Toyota entry.

After scoring a Rallye Monte-Carlo podium, Craig Breen/Paul Nagle make their second start in Croatia albeit with Ford rather than Hyundai power, which was the case in 2021. Breen’s Ford Puma Rally1 already has winning pedigree after nine-time WRC champion Sébastien Loeb drove an identical Puma to victory on Rallye Monte-Carlo.

The WRC2 category for Rally2 cars has a huge 29-car entry split across the Open, Junior and Masters divisions. Ten crews are entered in WRC3 for Rally3 cars with seven of those eligible for Junior WRC Championship points.

Croatians Niko Pulič and Ivica Siladic have secured WRC2 and WRC3 entries respectively. WRC2 newcomer Miko Marczyk from Poland has been helping to drive supplies to refugees entering his country from Ukraine, while Cristiana Oprea has travelled from Romania for what will be her WRC debut.

The route in short

The second Croatia Rally to count for the WRC is based out of Zagreb from April 21-24 and consists of 20 stages over a competitive distance of 291.84 kilometres.

Crews head to the hills of Samoborsko Gorje, Žumberak and Karlovac west and southwest of host city Zagreb for four stages each run twice either side of service in the capital on Friday April 22. Mali Lipovec - Grdanjci is up first from 08h33 local time, while the 20.77 kilometres of Stojdraga - Gornja Vas is packed full of corners.

Saturday’s route, again to the west of Zagreb and featuring four double-use stages, begins with Kostanjevac - Petruš Vrh, the longest of the rally at 23.76 kilometres. The day also includes the new Platak test to the far southwest close to the Adriatic Sea.

It’s an early start on Sunday with Trakošćan - Vrbno, another untried stage – and the rally’s most northerly – getting underway at 07h18. The second pass of Zagorska Sela - Kumrovec forms the event-deciding Wolf Power Stage.

Platak and Trakošćan - Vrbno are new for 2022 and their inclusion is part of efforts by the rally organisers to widen the event’s geographic spread to give more fans the chance to follow the action, while also reducing traffic congestion on certain liaison sections. This has led to five rather than the three countries from 2021 hosting stages.

Both new stages are narrow in nature and feature several grip changes. Platak, which is based close to a ski resort in view of the Adriatic Sea, includes a Fan Zone at the mountain stage’s summit. Trakošćan - Vrbno, which includes undulating sections, will be familiar to some teams as it served as a test stage last season.

Damage from an earthquake means the finish ceremony, which is due to begin at 15h30 on Sunday April 24, has been moved from St Mark’s Square to the service park. The ceremonial start at 18h30 on Thursday will use an area in between the National and University Library and Zagreb Fountains.

Sébastien Ogier and Julien Ingrassia made history by winning the first Croatia Rally to count for the FIA World Rally Championship on April 25, 2021 – albeit by a scant 0.6 seconds. In a dramatic finish to the Wolf Power Stage, the Toyota duo beat their team-mates Elfyn Evans/Scott Martin with Hyundai-powered Thierry Neuville/Martijn Wydaeghe just 8.1s behind the winners after three days of spectacular action on stunning countryside roads close to the Croatian capital Zagreb.

Despite nursing damage to the right side of their Yaris WRC following a road traffic accident on the liaison section heading to SS17, overnight leaders Ogier/Ingrassia remained in contention for victory starting the rally’s deciding test, which they began 3.9s behind Evans/Martin.

Although the French pair made a minor error, they went quickest through the run to lay down the gauntlet for Evans/Martin. The Britons appeared to have done just enough to take the victory until they slid wide on a right-hander within sight of the charge to the stage finish. Starved of vital traction as they mounted an earth bank, the seconds lost meant they completed the stage 4.5s slower than Ogier/Ingrassia to lose the rally by 0.6s.

Speaking immediately after taking a dramatic Croatia Rally victory, Ogier said: “It went to the last metres. The emotion is super-strong, it’s been a crazy rollercoaster for us this weekend. This is why we do this sport for this emotion. I said ‘sorry’ to Elfyn because he’s done an amazing job as well.”

Evans added: “I just got onto the loose and completely missed the next corner so for sure it wasn’t all lost there but I say one second was gone. It was a big fight all weekend and hats off to Seb for that last stage. Next time.”

What’s your aim for Croatia Rally?
“The start of the season was quite difficult, Sweden went much better but it’s important to have a strong event in Croatia and make another good result. We’re second in the championship. We know on Tarmac we will have some little issues but if we get through the event without major problems then I think we can finish on the podium. The target will be to give it everything and take good points for the championship. The championship is long and we are capable of doing great. If we improve a bit more on Tarmac we should have some strong events coming up.”

How difficult is this rally?
“Last year the weather was dry but it was surprising the grip changes you can experience and there was lots of cutting so the road was getting quite dirty. Let’s see what the conditions will be like this time. We do not have so much experience with the Rally1 cars yet and the additional hybrid power makes a difference. But at least the rally is not new for us and many stages are repeated from last year and that helps as well.”

You were unlucky not to win last year, what went wrong?
“Last year we could have won the event but our whole team made a wrong tyre choice on Saturday morning and we lost the lead and a good position with our cars. It was a team decision, we paid for it, but we were still able to secure third place so at least we were on the podium. We shouldn’t do those mistakes again.”

Official WRC tyre supplier Pirelli will provide the PZero HA (hard) and SA (soft) tyres. The first-choice hard compound tyre is designed for warm and dry conditions. The soft-option tyre is better suited to colder temperatures and damp road surfaces. In the event of heavy rain, the Cinturato wet tyre can be used. A maximum of 28 tyres can be used by teams during the event including four for Shakedown.