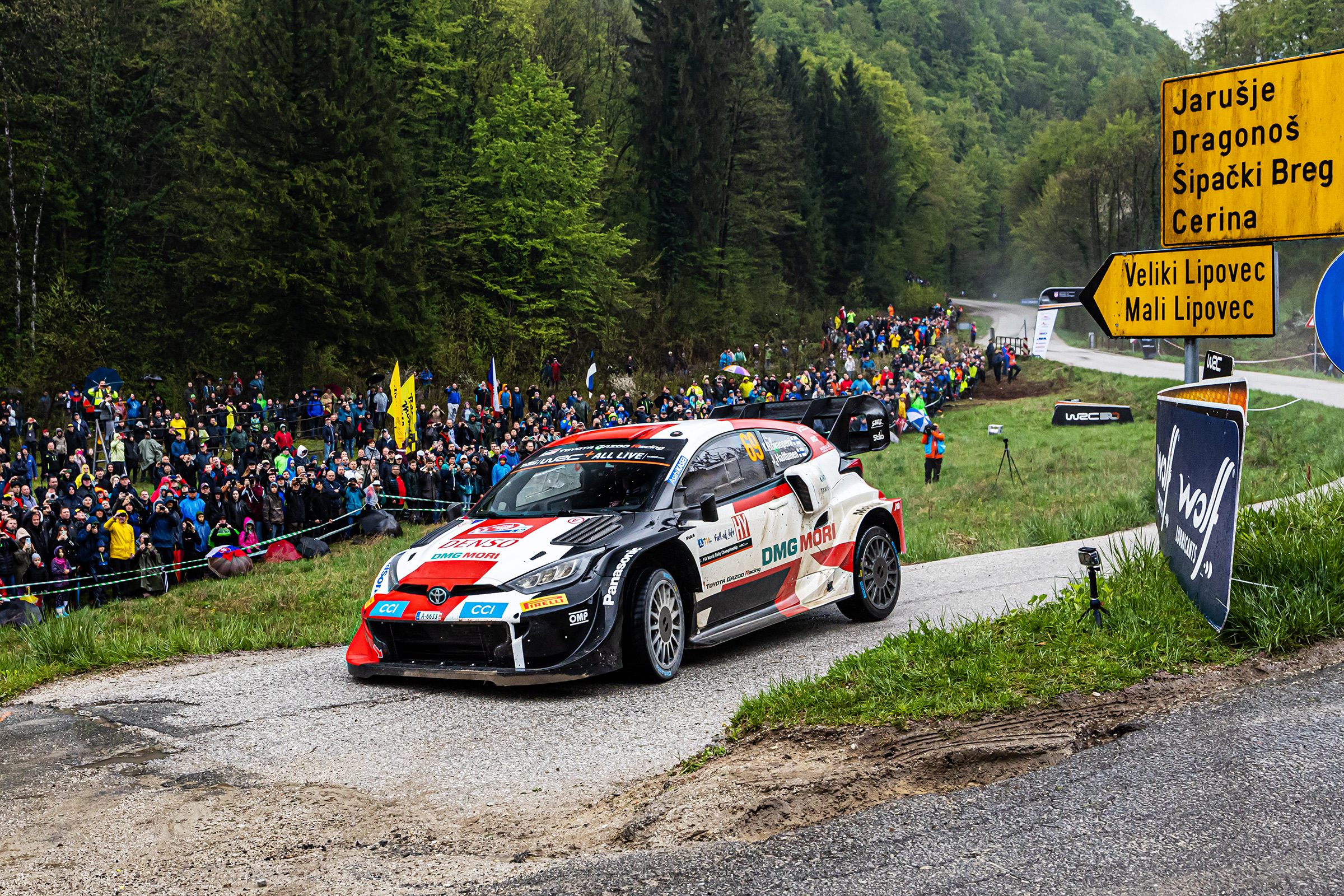 Kalle Rovanperä stamped his mark on the Croatia Rally by winning six of the eight stages that made up leg one, to build a commanding lead on a day when rain, fog and slippery roads challenged the crews to extremes.

The Belgian duo were only 12.5s off the lead at the end of the morning’s first loop in their Hyundai i20 N Rally1 – before disaster struck on the road section back to the Zagreb Fair service park. An alternator problem led to a failure as they approached service, forcing them to get out and push. They made it back exhausted – but late by four minutes, incurring a 40s second penalty and dropping them to fourth for the afternoon loop of four stages.

“It was probably one of my top days in a rally car,” said Rovanperä. “The roads this afternoon were a lot more dirty, as we expected. All the cuts were muddy for us too, so it was not such a big difference to be first on the road. It’s always nice to have a lead, but it’s also difficult to have a big lead like this. Tomorrow is still a long day, anything can happen and you need to drive fast to keep your concentration. We just need to keep our pace.”

Neuville wasted little time on SS5 grabbing back second place from team-mate Ott Tänak and the M-Sport Ford Puma Rally1 of Craig Breen, who had also moved ahead of him thanks to the penalty. But a foggy windscreen on SS6 cost Neuville time, dropping him back behind Tänak, who then suffered a puncture on the penultimate stage. Neuville ended the day on a positive note, beating Rovanperä to the SS8 stage win by 2.8s and holds an advantage over 2019 FIA World Rally Champion Tänak of 19.3s.

“It was exhausting,” said Neuville of the need to push the car into service. “We changed the alternator on the road and tried to get back on time. We would have made it work, but unfortunately we had the same issue a couple of metres from here. We give it all, we never give up, but unfortunately it was a 40s time penalty. It’s important to get strong points from this weekend and keep our main rivals behind. Obviously Kalle was going faster than us today and we couldn’t have matched his speed without taking big risks, which was not the target today."

Tänak said: “I had a puncture [in the previous stage] and I had a hybrid issue on SS8. But otherwise I think it’s not so bad. We have had an OK day. It’s unfortunate for the puncture, but this was the maximum we could do.”

Breen’s overnight fourth place is a ray of light for M-Sport Ford on what was a tough day for the Puma Rally 1 quartet. Both Adrien Fourmaux and Pierre-Louis Loubet were forced to retire from the leg during the morning stages. A third puncture in just two stages left Loubet with no choice but to retire his Puma at the end of SS2. Then on the next stage Fourmaux lost control of his Puma just 200m after the start, crashing through a hedge and into the garden of a house, without injury either to himself or co-driver Alexandre Coria.

Gus Greensmith and co-driver Jonas Andersson survived a ride up a grassy bank on SS1 to establish themselves in fifth, only to pick up a right-front puncture and damage to their Puma’s front-left rim on the first test of the afternoon, losing them more than a minute. “It was going fine until then, but I didn't hit anything,” said Greensmith. “In the braking, it just collapsed.” Another puncture, a soft left-rear and what Greensmith thought was a driveshaft issue in SS8 ended the day on a low note. The Puma lies in eighth position.

While Rovanperä looked serene up front, the same certainly could not be said for his team-mates Esapekka Lappi, Elfyn Evans and Takamoto Katsuta. In an echo of Rovanperä’s fate on the Croatian Rally last year, Lappi lasted only 9.9km into SS1 before clipping a large rock and incurring damage to his right-front suspension that forced him to retire from the leg.

As for Evans, he was frustrated to pick up two front-left punctures, the first on SS1 and the second on SS4 that left him down in eighth, more than two minutes off the lead. The Welshman took a stage win on SS3, proving 2.6s faster than Rovanperä, but ended the day unhappy in sixth position behind Oliver Solberg’s Hyundai, which incurred front bodywork damage on SS6. “It’s not been ideal at all,” said Evans. “I haven’t felt fully at one with everything. The car has been working well, but I struggled for that last bit of confidence. We’ve still been able to do some good times, but obviously the punctures this morning were very damaging.”

Katsuta struggled for confidence in the worst of the conditions in the morning, but picked up pace in the afternoon to finish the day in seventh place.

ROSSEL LEADS THE WAY IN WRC2

Frenchman Yohan Rossel and co-driver Valentin Sarreaud head WRC2 in their PH Sport Citroën C3, with a lead of 36.3s over the Toksport Skoda Fabia Evo of Nikolay Gryazin and Konstantin Aleksandrov.

“It’s just confidence,” said a satisfied Rossel. “Honestly the car is just perfect. It was a little bit dry at the end of SS7 and the [wet] tyre moved a lot. It’s so long tomorrow and two more stages today. It’s incredible. I am happy, it’s perfect. But it’s so difficult.”

Robert Virves leads the Junior World Rally Championship in his Fiesta Rally3, but only by a scant 0.7s from Sami Pajari in what looks set to be a hard-fought battle over the weekend.

Leg two of the Croatia Rally begins on Saturday morning at 07:43 local time with SS9 – the 23.76-kilometre Kostanjevac - Petruš Vrh stage, the first of seven tests before the final leg brings the event to a climax on Sunday.