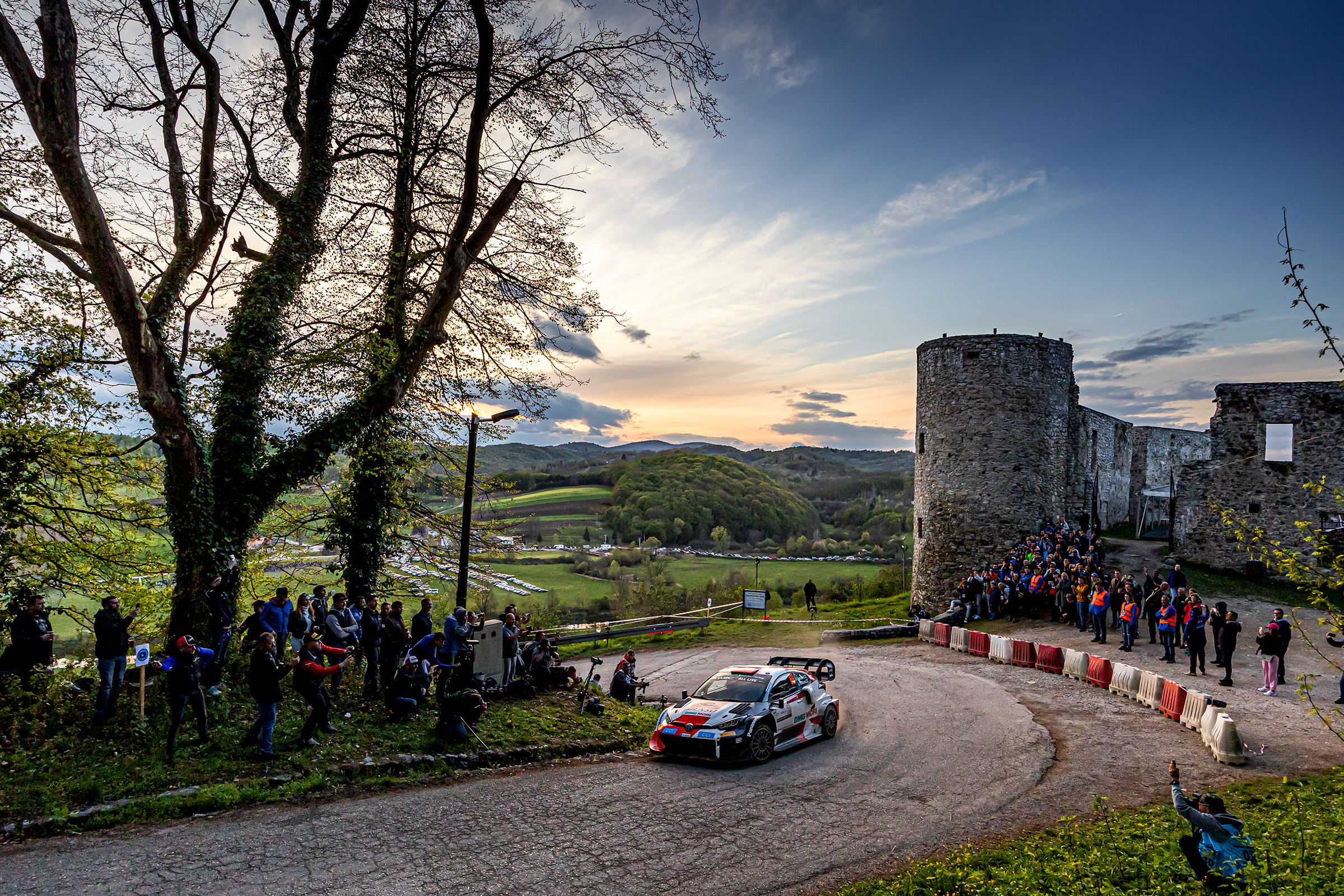 The Croatia Rally is finely poised ahead of the final day following a dramatic leg two as Kalle Rovanperä lost his commanding lead to a puncture on Saturday morning and found himself hunted in the afternoon by Ott Tänak. The Estonian will head into Sunday 19.9s behind the Finn.

Toyota Gazoo Racing’s FIA World Rally Championship points leader picked up a front-left puncture on the 15.85km SS11, Platak, which slashed his advantage over Tänak from more than a minute to just 18s in one fell swoop. Hyundai Shell Mobis World Rally Team driver Tänak further trimmed the gap to 13s after SS13, before Rovanperä responded on the next test. Following the cancellation of SS15 because of dense fog, for what would have been the second run over Platak close to the Adriatic coast, the pair faced off on the scenic Live TV stage, Vinski Vrh, on Saturday evening when Rovanperä lived up to his ‘full send’ motto. He scored his first stage win of the day to extend his lead to just under 20 seconds.

“This is my reply!” said Rovanperä when questioned about Tänak’s pressure after the final stage of the day, SS16.

Tänak remains cautious about his chances of catching the rally leader. “Let’s see,” he said. “This afternoon I didn’t have a good feeling to really push to the limits. I have been trying, but not really had the feeling."

BREEN VS NEUVILLE FOR THIRD

Behind the leading pair, M-Sport Ford’s Craig Breen and Hyundai’s Thierry Neuville will battle for the final podium position on Sunday and are separated by just 4.9s after leg two. Neuville’s day started badly when he was hit with a 10-second penalty for leaving service late for the opening stage, added to the minute he incurred the previous night for speeding on a road section during his alternator problems after SS4. The double-blow dropped him to fourth.

Neuville complained of an intermittent power problem on Saturday afternoon, but it didn’t stop his i20 N Rally1 closing in on Breen’s Puma as the Irishman grappled to get up to speed on Croatia’s stunning but slippery asphalt stages.

When asked about his podium chances, Neuville said: “I think we deserve it, so we should fight for it and get it. But it won't be easy.”

Breen’s confidence was lifted following a positive final run on SS16. “That was nice, I enjoyed it,” said the Irishman. “I just needed to have a little reset and I tried to enjoy the driving. We're ready for tomorrow.”

SOLBERG CRASHES OUT ON FIRST STAGE

Oliver Solberg and co-driver Jonas Andersson were out of luck on the first stage of the morning, Kostanjevac – Petruš Vrh, when the pair crashed out in their Hyundai. Their i20 N Rally1 was further damaged by a brief fire. Neither were injured, but the stage was cancelled after just six of the crews had completed the 23.76km test.

“It wasn’t dramatic in the beginning,” said Solberg. “We came over a crest and the rear just went a little bit wide and I thought it was just going to be a normal slide, but it just snapped and I ended up in a tree. The damage was not so high, but then I got out of the car and the fire came. Then it was dramatic. It’s very unfortunate for the team and it caused a lot of damage. It was a very tricky rally, a lot to learn for next year. I don’t think I’ll be back tomorrow. Unfortunately because of the fire it’s the end of the rally for us.”

EVANS AND KATSUTA IN TOP SIX

Toyota Gazoo Racing’s Elfyn Evans and Takamoto Katsuma are fifth and sixth heading into Sunday. The Welshman lies 49.9s behind Neuville as he continues his recovery from the puncture delays that ruined his opening leg on Friday. Katsuma is more than three and a half minutes further back, following a puncture on SS13, as he builds experience and confidence on the Croatian stages.

Toyota’s Esapekka Lappi and M-Sport Ford’s Gus Greensmith returned to the Croatia Rally on Rally Restart rules following their retirements yesterday. Lappi, running first on the road, scored a hat-trick of stage wins during the leg, but had a half-spin just seconds after the start of SS11 run in wet and foggy conditions, then had a full spin at the Frankopan castle hairpin on SS12.

Greensmith was frustrated by his fifth puncture of the weekend, on SS12. “I noticed it after a jump, so maybe it happened on the landing,” he said. Team-mate Pierre-Louis Loubet also returned following his puncture-induced retirement on Friday and logged good experience on his debut in M-Sport’s Puma.

Yohan Rossel and co-driver Valentin Sarreaud continue to lead WRC2 in their Citroën C3. The French pairing, who are seventh in the overall standings, lead Nikolay Gryazin and Konstantin Aleksandrov in their Skoda Fabia Evo by 35.1s. Behind them, a puncture for a frustrated Eric Camilli (Citroën) on SS13 handed third place to Poland’s Kajetan Kajetanowicz (Skoda).

“It’s a great day, I think,” said Rossel. “With the slick on the car I push on the limit a little bit more easily. I was a little bit cautious on the second loop, but it’s OK.”

“Honestly I don’t know where we are standing now,” said Gryazin. “I’ve told the co-driver not to tell me, so we can focus just on the driving. Tomorrow after the last stage…”

In Junior WRC, Sami Pajari and Robert Virves continued their tight and thrilling duel, with Pajari managing a superb time on SS11 that was good enough for eighth overall. Pajari lies 14th overall, 49.1s ahead of Virves.

The third and final leg of the Croatia Rally begins with SS17, Trakošćan – Vrbno, with the first car due on stage at 07:08 local time. The four stages on Sunday will conclude with the Zagorska Sela – Kumrovec 2 Wolf Power Stage, which is due to start at 13:18.