Leg Two Midday Report: Tänak Back in the Game 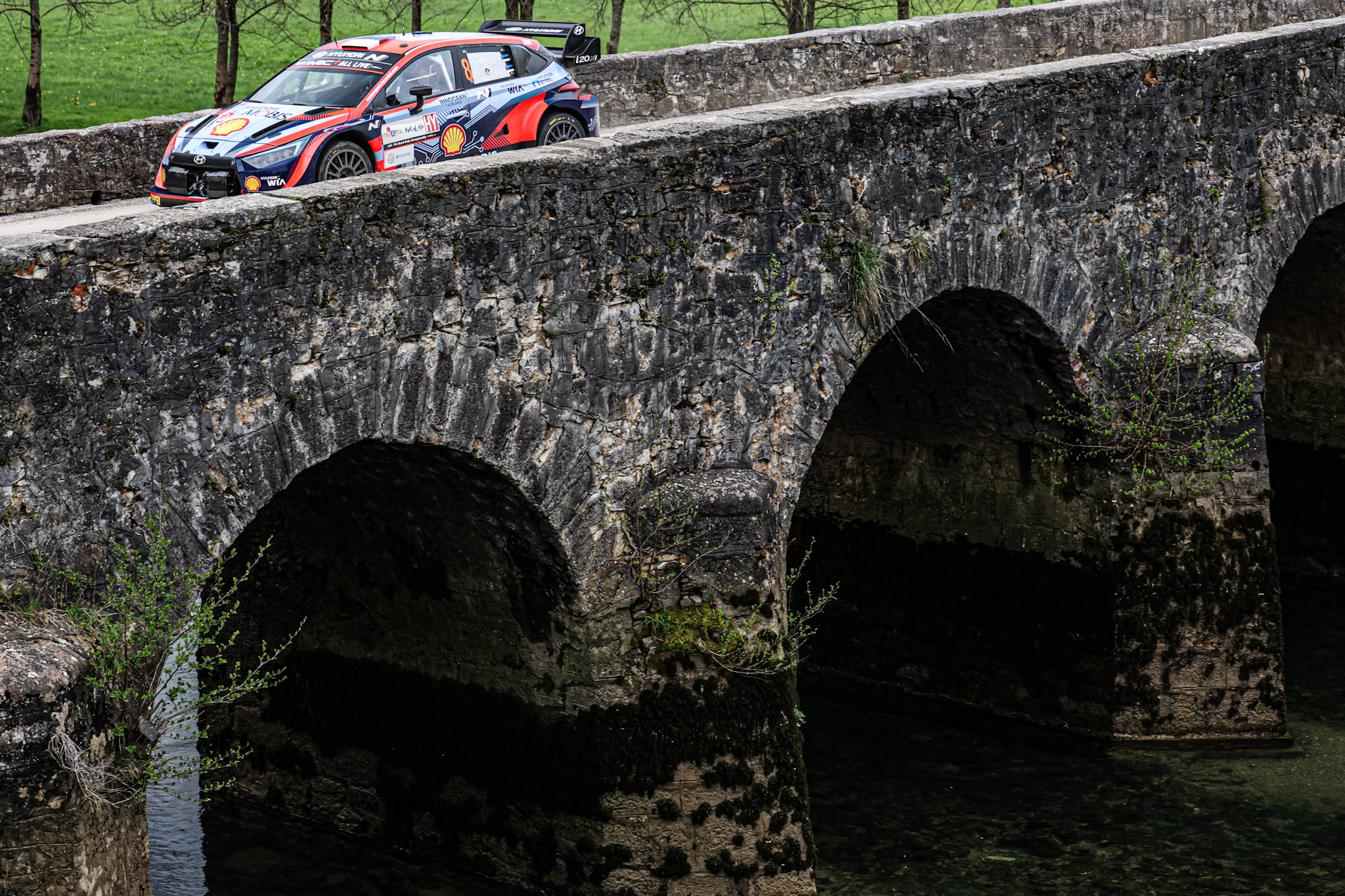 Kalle Rovanperä’s commanding lead on the Croatia Rally has been slashed to just 16.8s over Ott Tänak after the Toyota Gazoo Racing driver picked up a front-left puncture in streaming conditions on the third stage of the morning.

Tänak’s Hyundai Shell Mobis World Rally Team i20 N Rally1 is now fully back in the hunt following the drama on SS11, the 15.85km Platak 1 test situated close to the Adriatic coast that was shrouded in thick fog and persistent rain. The leg had started in dry conditions, but the weather quickly deteriorated as they headed towards the coast and Tänak and Rovanperä’s decision to choose full-wet Pirelli tyres gave them a performance edge over the rest of the field. Now Tänak has a chance to push Rovanperä ahead of the afternoon loop on the same four stages.

“Ott has been really fast today so I think it’s going to be a tricky afternoon, but let’s see what we can do,” said Rovanperä, who lost 1.4s to Tänak on the final 8.78km stage of the morning. “It depends how well we can react and it’s also important for us to score some points, so we have to be clever.”

“This rally is so tricky and I am happy that we have only had one puncture [yesterday], so we will try to keep it like this,” said Tänak.

TOUGH MORNING FOR NEUVILLE AND SOLBERG

Hyundai’s day began badly when Thierry Neuville was hit with a 10-second penalty for leaving service late for the opening stage, added to the minute he incurred last night for speeding on a road section during his alternator problems after SS4. The double-blow has dropped him to fourth. “Another penalty,” said Hyundai’s deputy team director Julien Moncet. “Not the best start to the day. A mistake on the hybrid, that’s it. It’s our fault.”

That opening stage, the 23.76km SS9 (Kostanjevac – Petruš Vrh), was cancelled after just six cars had passed through following an accident for Oliver Solberg and co-driver Elliott Edmondson, which forced the Hyundai into retirement. The pair were uninjured.

“It wasn’t dramatic in the beginning,” said Solberg. “We came over a crest and the rear just went a little bit wide and I thought it was just going to be a normal slide, but it just snapped and I ended up in a tree. The damage was not so high, but then I got out of the car and the fire came. Then it was dramatic. It’s very unfortunate for the team and it caused a lot of damage. It was a very tricky rally, a lot to learn for next year. I don’t think I’ll be back tomorrow. Unfortunately because of the fire it’s the end of the rally for us.”

Craig Breen heads into the afternoon loop in third place, 57.8s down on the leader and 26.2s up on fourth placed Neuville. The M-Sport Ford Puma driver had a decent morning, but lost 11.6s to Neuville on SS12 when he slid off at a hairpin, narrowly missing a stone wall.
“I thought I could leave my braking a little bit later but it wasn’t to be,” he said. “I probably dropped about eight or ten seconds with that, but there we go.”

EVANS AND KATSUTA IN TOP SIX

Toyota Gazoo Racing duo Elfyn Evans and Takamoto Katsuma are fifth and sixth on the leader board, the Welshman 37.2s down on Neuville as he recovers from the puncture delays that ruined his leg one yesterday. Katsuma is more than two minutes further back as he builds experience and confidence on the challenging Croatian stages.

Esapekka Lappi and Gus Greensmith returned to the Croatia Rally on Rally Restart rules following their retirements yesterday. Toyota driver Lappi, running first on the road, took a stage win in the tricky SS10, then had a spin at the start of the very tricky SS11. He also spun at the hairpin on SS12.

Greensmith was frustrated by another tyre problem, his fifth puncture of the weekend, on SS12. “I noticed it after a jump, so maybe it happened on the landing,” he said. Pierre-Louis Loubet also returned following his puncture-induced retirement yesterday and logged good experience on his debut in M-Sport’s Puma.

Yohan Rossel and co-driver Valentin Sarreaud consolidated their lead in WRC2 in their Citroën C3. The French pairing head Nikolay Gryazin and Konstantin Aleksandrov by 46.1s, with the Skoda 22.1s clear of third-placed Eric Camilli (Citroën).

The afternoon loop begins at 15:16 local time with a second run over Kostanjevac - Petruš Vrh. After the four stages, including the Live TV evening finale on Vinski Vrh – Duga Resa, the crews will return to the Zagreb Fair service for the night before the final leg on Sunday.