Rovanperä Hits Back to Win 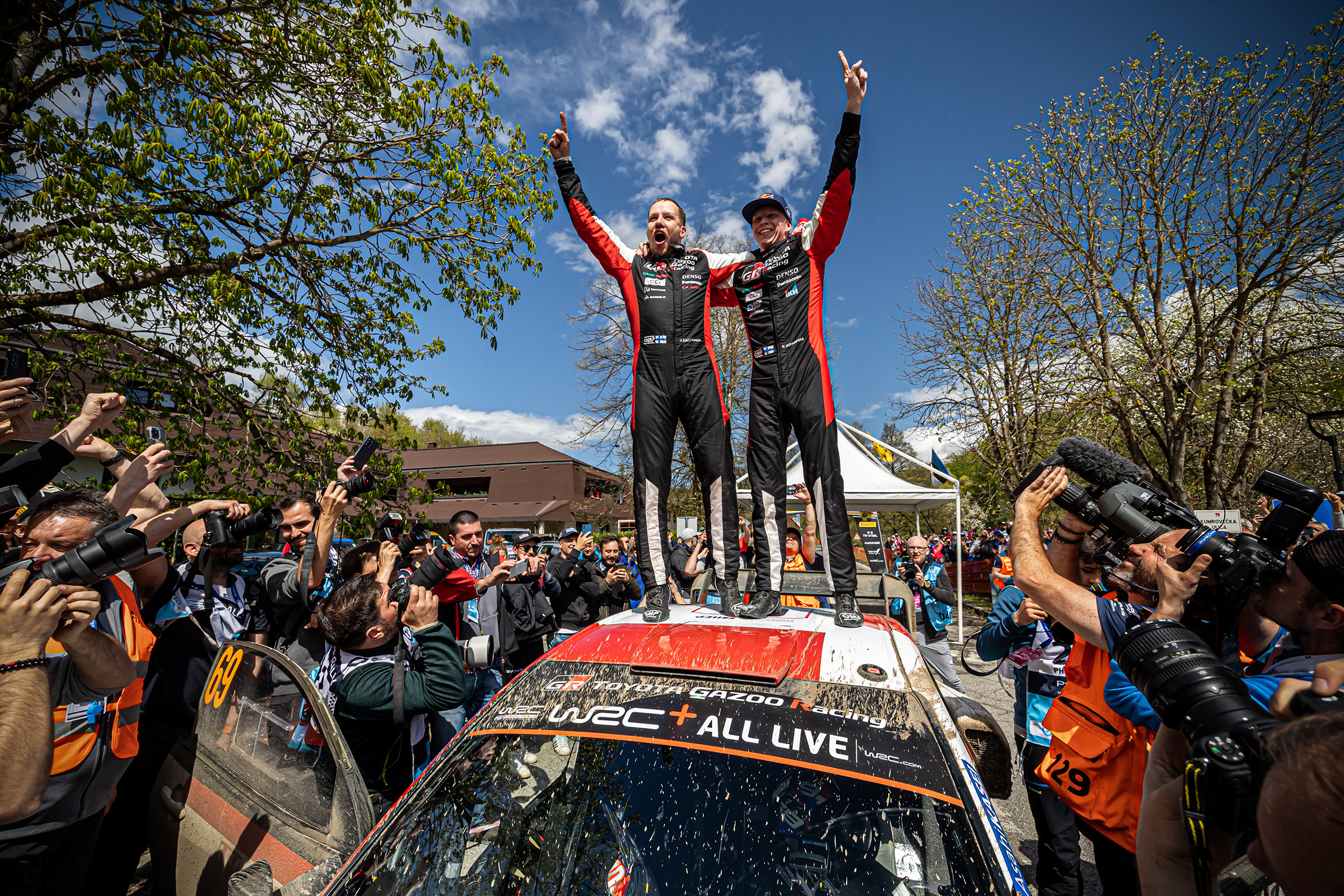 Kalle Rovanperä pulled off an amazing comeback on the final Wolf Power Stage of the Croatia Rally to snatch victory from Ott Tänak by just 4.3s, at the climax of an amazing final leg during which the Finn’s hopes had appeared to slip away.

The Toyota Gazoo Racing WRT driver, who had led the rally from the first stage on Friday morning, appeared destined for a heartbreaking defeat following the penultimate stage on Sunday morning. He entered the 13.15-kilometre Trakošćan – Vrbno test with an advantage over Tänak of 28.4s. But heavy rain and a variation in tyre choice caught out Toyota and wiped out his lead. Hyundai Shell Mobis World Rally Team driver Tänak ran with a crossover pair of soft-compound Pirellis and two wet-weather tyres, with Rovanperä and his co-driver Jonne Halttunen on two hard and two rain tyres – and it worked out in Tänak’s favour. He was 29.8s faster to jump into a slender lead of 1.4s with just the Wolf Power Stage to go.

But in dry conditions and on a mixed tyre choice of two hard-compound Pirellis and two wet-weather tyres, versus Tänak on softs all round, Rovanperä overturned the deficit with a fantastic stage-winning run. Tänak crossed the beam 5.7s down to lose the rally by 4.3s.

“It’s amazing,” said Rovanperä, 21, whose fourth WRC victory has increased his points lead in the 2022 standings. “We pushed really hard and we deserve it this weekend. For sure, it’s the best win of my career and the toughest one.

Toyota Gazoo Racing WRT team principal Jari-Matti Latvala said: “It’s incredible. I was absolutely sure we were not going to win this event, I thought Kalle wouldn’t have a chance in these conditions. When you see the mud around you know soft tyres are the correct tyre, and that’s what Kalle told himself, that soft tyres would have been best for the stage! I don’t know how he managed to do it. This kid is a miracle, amazing job. I’m so happy for the team and thanks for the amazing fight, Kalle.”

“I didn’t take any risks to really retire, but obviously Kalle did a good drive and I was clean as well, so no mistakes,” said Tänak of their duel on the Wolf Power Stage. On his fight for the win, he said: “It was just because of the tricky conditions and clever tyre choices.”

Thierry Neuville and co-driver Martijn Wydaeghe delivered a 2-3 result for Hyundai, but almost lost it with a dramatic nose-dive into a ditch on the Wolf Power Stage. The pair had overcoming M-Sport Ford’s Craig Breen and Paul Nagle earlier on the final leg. Starting the day 4.9s down in fourth, Neuville seemingly grabbed the podium position on the second test of the morning with a committed stage-winning performance and widened the gap on the wet penultimate stage to 1m42.4s. It was just as well he did. The Hyundai i20 N Rally1 bounced out of the ditch and Neuville was able to nurse the car to the finish despite two punctures, to keep Breen off the podium by 46.3s.

“At the end a mistake,” said Neuville. “I just got caught under braking with the hard tyre, it didn’t get any grip so we went straight. Luckily we get away with it, but that’s rallying. We were very unlucky with a couple of things over the weekend which caused us some time penalties. But in the end the luck was on our side on the last stage.”

Breen finished as the best of M-Sport Ford’s Puma drivers in fourth after a strong weekend’s performance. “Unfortunately our mistake with the tyre choice for this leg ruined our chances of a podium,” he said.

TOP SIX FOR EVANS AND KATSUTA

Toyota drivers Elfyn Evans and Takamoto Katsuta claimed fifth and sixth after largely frustrating rallies. Welshman Evans was on the back foot from leg one when two punctures ruined his Friday. He added three bonus points to his tally with third place on the Wolf Power Stage, but was disappointed to finish more than three and a half minutes off the lead.

Katsuta admitted he lacked confidence on the tough Croatian stages, but worked hard with co-driver Aaron Johnston to bring his GR Yaris home without drama on the final day.

Yohan Rossel and co-driver Valentin Sarreaud kept their heads during the penultimate-stage drama to ensure a deserved victory in WRC2. The pair finished seventh overall in their Citroën C3, but the heavy rain that turned the overall order on its head also changed who they beat, as WRC2 cars peppered the stage’s top-six fastest times, behind SS19 winner Tänak.

Nikolay Gryazin and Konstantin Aleksandrov (Skoda) dropped from second to fourth on the drenched roads. That meant Kajetan Kajetanowicz (Skoda) finished second in WRC2, a minute behind Rossel, with Emil Lindholm (Skoda) third. Remarkably, Lindholm not only won the Wolf Power Stage for WRC2, he also finished fifth overall to claim a WRC bonus point.

“After Monte, I worked very hard with the team and this win is for them,” said Rossel. “The most important thing was to win here. The target is to try and win the championship, but there’s still a long way to go. I think it’s perfect to try and win our second event.”

In Junior WRC, high drama played out on the final leg. First there was heartbreak for Sami Pajari when he crashed out of the lead on the second stage of the morning. That opened the door for Robert Virves to claim what looked a certain victory in his Fiesta Rally3 – only for a penalty for checking in early to the Wolf Power Stage to drop him down the order and hand the win to Finn Lauri Joona and co-driver Mikael Korhonen (Fiesta Rally3).