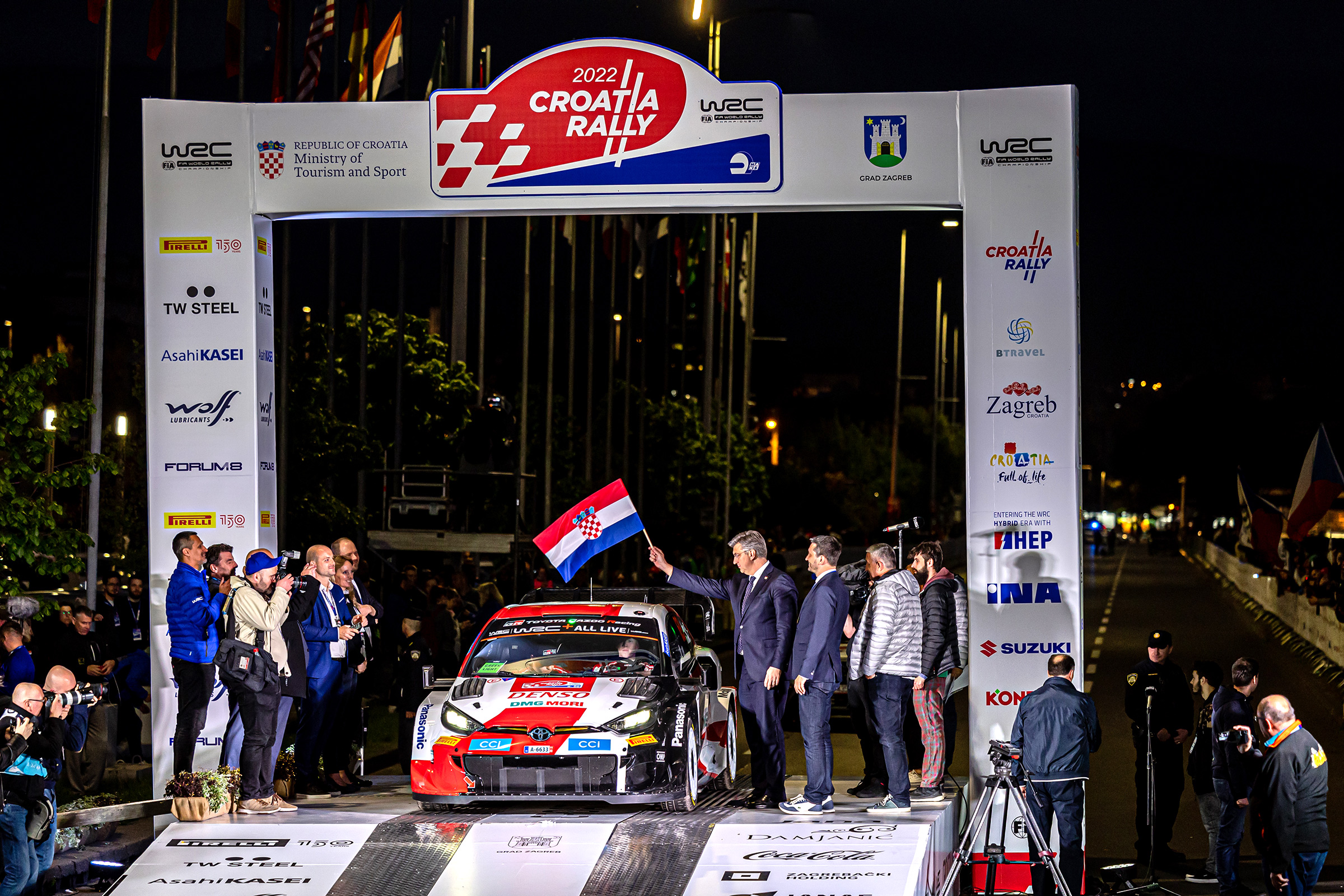 The Croatia Rally got underway in spectacular fashion at the Ceremonial Start in Zagreb this evening, in front of a large and enthusiastic crowd that gave the stars of the FIA World Rally Championship a fantastic welcome.

In its second year as a round of the WRC, the opening event was launched into gradual darkness as crews drove over the start ramp in descending order from 18:40 local time, with the FIA Junior WRC Championship drivers followed by the WRC3 and WRC2 runners before the top-class Rally1 contingent took centre stage – in silence, on hybrid power alone. The sound of cheers and airhorns more than made up for the lack of engine noise.

The leading crews were welcomed on to the ramp by Croatian Prime Minister Andrej Plenković and in true WRC tradition, they were signalled away by the lifting of the country’s national flag, the distinctive red, white and blue of the Croatian trobojnica.

Toyota Gazoo Racing’s WRC points leader Kalle Rovanperä was among those to pay tribute to the fans who had turned out to welcome their rally heroes to Croatia. “The feeling is now really good, we have a good start to the season under our belts,” he said. “The fans make a big difference to us as drivers. There are a lot of fans on the stages and here also, which is nice to see. I’ll see you all on the stages and hopefully we can give you a good show.”

Hyundai Shell Mobis World Rally Team driver Thierry Neuville, who finished third on the Croatia Rally last year, made clear his ambitions for the weekend. “The target is the victory, that’s for sure,” said the Belgian. “It’s difficult to predict what will be the result at the end of the weekend. We know we have the potential, but we also know we struggled quite a lot on Tarmac in Monte Carlo. I have a feeling we are better prepared, we’ve had more time and have more parts! We should be strong enough to fight for victory.”

Neuville continued: “I’m always impressed when I come to Croatia: lots of people and they are very excited. It seems motor sport is in their blood. We’ve seen a lot of spectators on shakedown, so I hope they are going to enjoy the weekend.”

Elfyn Evans returns to the scene of heartbreak – he lost the 2021 Croatia Rally by just 0.6s after a late mistake. “It was a good rally last year, even if it didn’t end the way we wanted,” he said. “This year we’ve got quite a lot of changes, including a different set of conditions. Not a lot of similarities, but we’re always looking to do as well as we can.”

Hyundai’s Oliver Solberg was another to be thrilled by the enthusiastic welcome. “The atmosphere is amazing, the people have so much passion and you could really see it at shakedown today,” he said. “It’s really exciting to drive here. It’s my first time, so I need to be a little realistic tomorrow on super-difficult roads. I just need to get experience, enjoy it and see what happens. I like the rain – I need to be clever and brave!”
Eric Camilli, the WRC2 pacesetter in shakedown, said the category will be wide open this weekend. “At the moment it is very difficult to say who will win, because the roads are… are not crazy, but very tricky with the rain. It will be a long rally and we will try to have a mix between speed and trying to finish. It won’t be easy for anyone. But the atmosphere is great.”

Meanwhile, Jean-Baptiste Franceschi, the fastest Junior WRC driver in shakedown this morning, said he was thrilled to be back rallying after recovering from serious injury. “The feeling is amazing,” he said. “Of course we have to wait on the weather because it is going to be difficult if it’s raining. But it’s the same for everyone, so we’ll give our best and see. Of course he target for me is to be in the fight this year for the Junior WRC, but we have time for this and we will see on this rally.”

Leg one begins with the 19.20-kilometre Mali Lipovec stage from 08:33 tomorrow morning (Friday). It’s the first of eight stages over a competitive distance of 120.38 kilometres scheduled for the opening day. As the drivers made clear, rain is forecast to further increase the challenge crews will face on the exciting and picturesque Croatian roads.