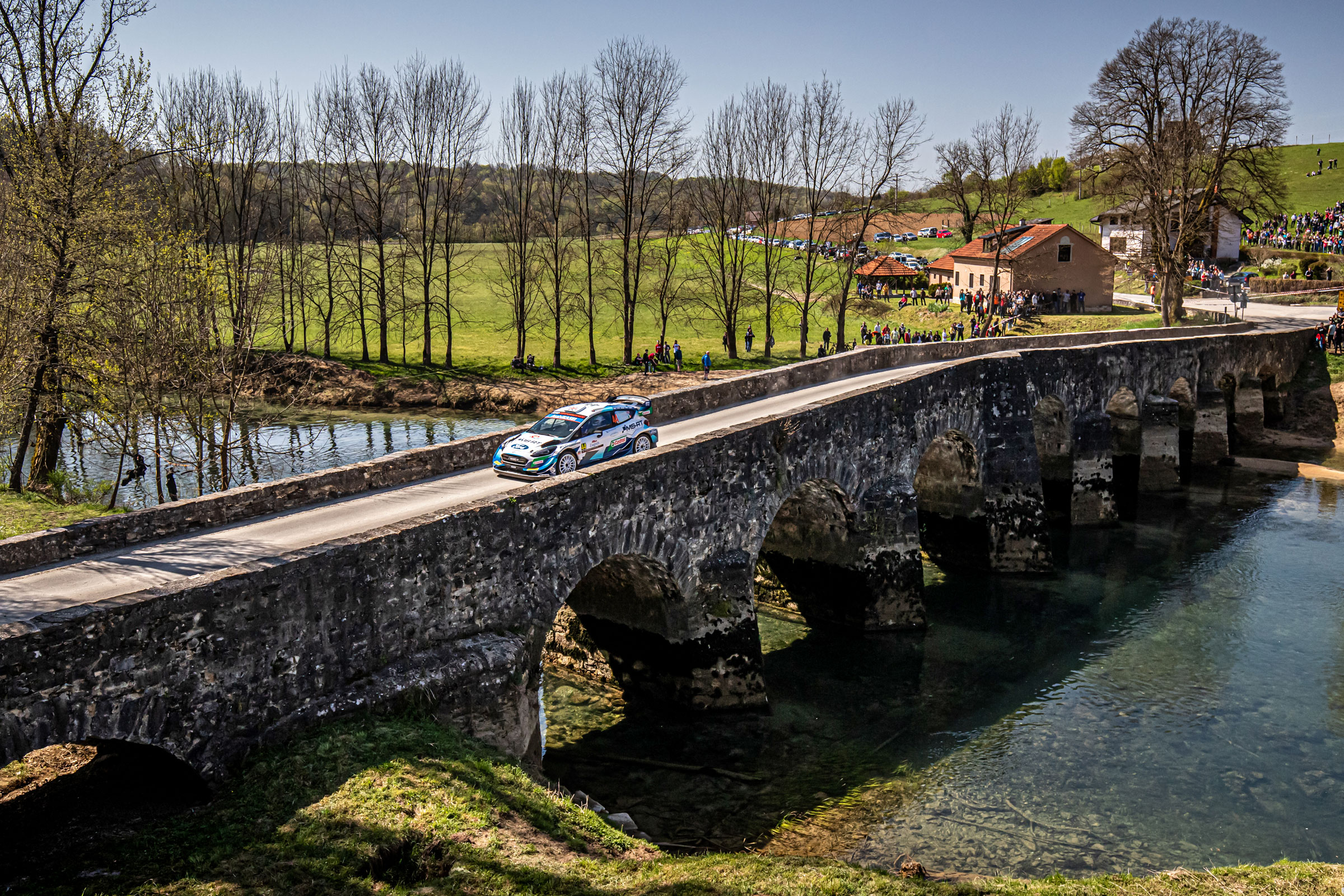 It was all-change on the Croatia Rally this morning with overnight pacesetters Thierry Neuville and Martijn Wydaeghe slipping to third and world champions Sébastien Ogier and Julien Ingrassia completing Saturday’s opening loop of the Croatia Rally with an advantage of 7.0s.

The dramatic change of positions owed much to the respective tyre strategies of the factory Hyundai and Toyota teams. Toyota opted for hard-compound Pirelli tyres, while Hyundai selected a combination of hard and soft-compound Pirelli covers in the hope they would be more suitable for the conditions.

However, dry stages in the spectacular Croatian countryside and rising ambient temperatures meant the hard-compound option provided better grip and consistency, which was reflected by Toyota locking out the stage wins this morning with Ogier/Ingrassia fastest twice and Elfyn Evans/Scott Martin and Takamoto Katsuta/Daniel Barritt posting a fastest time apiece.

“Honestly I was quite confident our choice is the best one but you know we are still learning with this tyre so I couldn’t say we were 100 percent sure,” Ogier said after winning SS12. “But I was seriously thinking we should have the best choice. [The tyre choice this afternoon] should be an even easier choice.”

Having started leg two leading by 7.7s, Neuville/Wydaeghe returned to Zagreb Fair for the midday service 19.6s down on Ogier/Ingrassia in the third position following a morning of frustration for the Hyundai-powered Belgians.

“For sure [it’s been a frustrating morning],” Neuville said. “Now in this stage [SS12] I lost completely the brake pedal and I had no handbrake so it was really tricky this stage and on the gravel, I had to be very careful and I had to reduce the speed. I am lucky we are here. We are going to see [how big a push we do this afternoon]. Obviously, everything needs to be perfect and we didn’t do [that] this morning. A stall, the issue now and as well the tyre choice so we need to get it right for this afternoon.”

Evans/Martin are 12.6s up on Neuville/Wydaeghe with four stages of Saturday’s middle loop remaining. Asked by WRC Plus All Live about his Toyota team-mate Ogier’s performance, Evans said: “He’s had a strong morning and he’s not easy to beat. This afternoon now could be quite tricky. This morning was already a bit dirty than what I expected actually. I was hoping today would be a bit cleaner. Obviously, it’s drier but that means there’s a lot of loose gravel and in some places that’s even more slippery than the mud, so it’s not been easy out there.”

Ott Tänak/Martin Järveoja hold fourth overall, 37.5s off the leading pace, with World Rally Car rookie Adrien Fourmaux fifth alongside co-driver Renaud Jamoul. M-Sport driver Fourmaux, who is stepping up from WRC2 for the Croatia Rally, started leg two in the sixth position but moved ahead of Craig Breen/Paul Nagle when the Irish crew picked up a puncture barely 100 meters from the start of SS9. “I touched the kerb and had to stop and change it,” a dejected Breen said afterwards.

After clocking his first WRC stage win on Rally Monza last December, Toyota’s Japanese development driver Takamoto Katsuta was at it again on SS10 when he beat team-mate, Sébastien Ogier, by 3.4s over 20.77 kilometers following an impressive effort. “I felt the feeling of calm and changed a bit my driving style and it looks like it works well,” he said. “Of course, I am the first car on the road but it’s good if you are fastest on some stages.”

Adrien Fourmaux underlined his huge potential with the second-best run behind his hero Sébastien Ogier on SS9. Driving an M-Sport Ford Fiesta WRC in the world championship for the first time, Frenchman Fourmaux was 2.0s down on Ogier through the 20.30-kilometer Mali Lipovec – Grdanjci test. “I was really surprised this morning,” Fourmaux said. “Okay, I know I was driving really well and I was really happy with my job but to do the second-fastest time I was just completely happy, just crazy. After, [I needed] to be a bit more careful for the rest of the loop. The pace was really good in the first one and I need to continue to drive.”

Nikolay Gryazin/Konstantin Aleksandrov demoted Mads Østberg/Torstein Eriksen for the WRC2 lead on SS11 but dropped back to second on SS12 by 2.3s after being forced to wait on the start line for several minutes due to a stage delay. Teemu Suninen/Mikko Markkula are third.

Saturday afternoon’s loop begins with a repeat of the 20.30-kilometer Mali Lipovec – Grdanjci stage from 14:29 local time. The first crews are due back at the Zagreb Fair service park for the end-of-day service at 18:18.