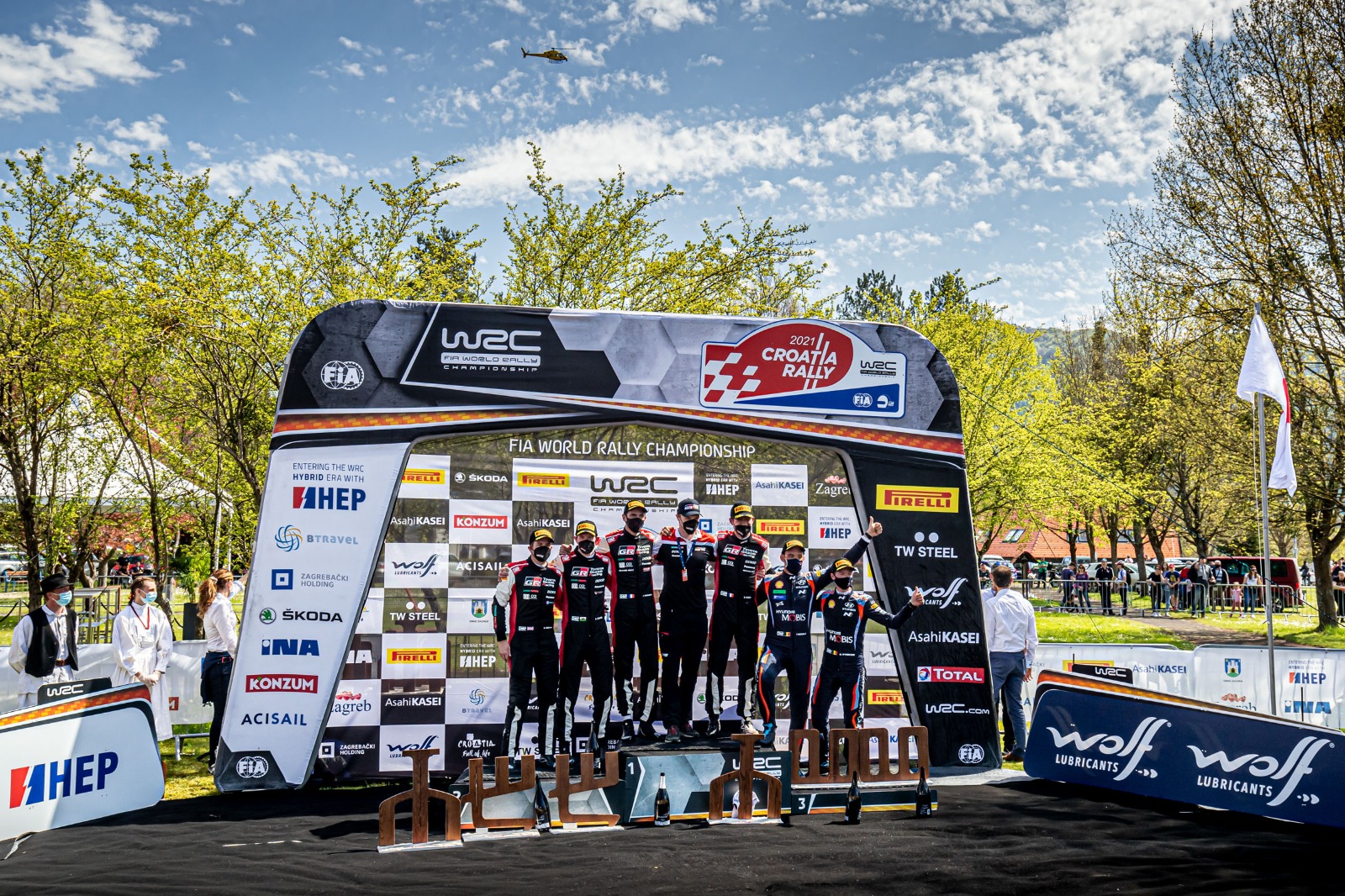 Sébastien Ogier and Julien Ingrassia made history this afternoon by winning the first Croatia Rally to count for the FIA World Rally Championship.

In a dramatic finish to the Wolf Power Stage, the Toyota duo beat their team-mates Elfyn Evans/Scott Martin by 0.6s with Hyundai-powered Thierry Neuville/Martijn Wydaeghe just 8.1s behind the winners after three days of spectacular action on stunning countryside roads close to the Croatian capital Zagreb.

Despite nursing damage to the right side of their Yaris WRC following a road traffic accident on the liaison section heading to SS17, overnight leaders Ogier/Ingrassia remained in contention for victory starting the Wolf Power Stage, which they began 3.9s behind Evans/Martin.

Although the French pair made a minor error, they went quickest through the run to lay down the gauntlet for Evans/Martin. The Britons appeared to have done just enough until they slid wide on a right-hander within sight of the charge to the finish. Starved of vital traction as they mounted an earth bank, the seconds lost meant they completed the stage 4.5s slower than Ogier/Ingrassia to lose the rally by 0.6s.

“It looks like it really went close to the last metres,” said Ogier, who moves to the top of the WRC standings by eight points. “Maybe the last mistake from Elfyn hand us the win but over the weekend the whole team has done an amazing job. Of course, the emotion for us now is super-strong, it’s been a crazy rollercoaster for us this weekend between the puncture, the issue this morning obviously. I was glad to still be in the race honestly. Now just to catch this is I guess why we do this sport for this emotion. I said ‘sorry’ to Elfyn because he’s done an amazing job as well and when you have done such a close finish you need only one winner. He was very close to do the same this weekend. But I’m very happy for the whole team, Toyota have been amazing this weekend and that’s for you guys, a lot of points and the car has been amazing. Congrats all of you.”

Evans said: “That last corner, I just got onto the loose and completely missed the next corner so for sure it wasn’t all lost there but I say one second was gone. That’s a shame but it was a big fight all weekend and hats off to Seb for that last stage. Next time.”

After completing the Croatia Rally podium in third following his fightback through Saturday afternoon, Neuville said: “I pushed very hard but I overshoot a junction in the stage so I lost easily three seconds. But we have tried, we have tried our best. I was absolutely on the limit of the car all the time, trying to enjoy, which we obviously did. Martijn did a good job, it wasn’t easy for the co-drivers. But we are happy to be here.”

Ott Tänak/Martin Järveoja finished fourth for Hyundai, one place ahead of Adrien Fourmaux/Renaud Jamoul in an M-Sport Ford Fiesta WRC.

It was a remarkable result for Frenchman Fourmaux, who was competing in a World Rally Car in the WRC for the first time in only his fourth season of rallying. “I’m really, really happy about our weekend, just a bit disappointed for one thing that the rally is finished now,” said Fourmaux. “It was just perfect, I can only say thank you M-Sport and Red Bull for all the opportunities and also the FFSA, they still believe in me after four years. To be honest it’s just incredible. It was an incredible weekend for us. I think we had an amazing pace in some stages, what a weekend. I don’t know [when we will be back in the car]. You will have to ask M-Sport for that.”

Takamoto Katsuta/Daniel Barritt, who won two stages on Saturday, took sixth place for the third round of the WRC running followed by Gus Greensmith/Chris Patterson, who were slowed by a hydraulic system issue and a brake problem during the morning runs.

Craig Breen/Paul Nagle, who finished eighth, made up for a frustrating event by going second fastest on the Wolf Power Stage. “Yesterday morning was such a disappointment, 100 metres into the day and already it was game over,” said Breen. “It was difficult to really go at 150 per cent on those tricky stages but, okay, I enjoyed it and I learned a lot. Hopefully we have a lot of food for thought. Hopefully, it will not be too long [that I am back in a World Rally Car].”

Mads Østberg/Torstein Eriksen overcame brake issues in their Citroën C3 Rally2 to claim the WRC2 win ahead of Teemu Suninen/Mikko Markkula in ninth overall. Nikolay Gryazin/Konstantin Aleksandrov were in the podium fight but crashed into retirement on SS19.

“It was one of the worst days I’ve had in a rally car,” said Østberg. “To do a day like today with no brakes. I can’t believe I’m at the end. So many times I couldn’t stop the car and I just had to roll and be really careful. I have no idea why we have this issue, but we forget about that now. We have won the first rally this year and of course we are very happy with that.”