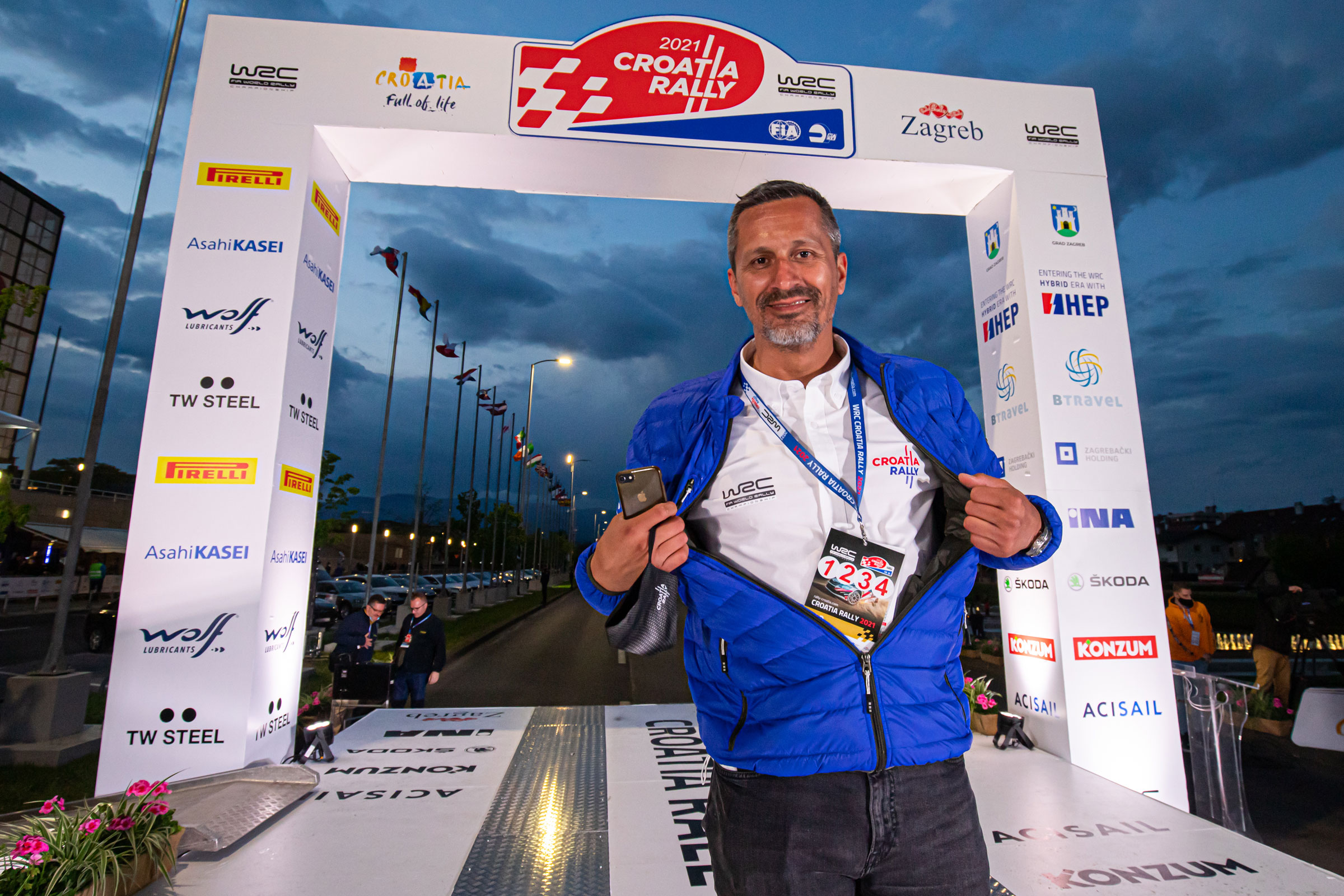 Following a spectacular edition of the Croatia Rally lest month (April 22-25), Daniel Šaškin, the President of the Organizing Committee, reflects on a hugely successful FIA World Rally Championship debut and looks ahead to a very bright future for the Zagreb event.

How pleased are you with how the first WRC-counting Croatia Rally went?

“I’m actually quite happy. There are some things I would like to improve, there are some things we learned and I think we can deliver better next year if we are given the chance to do it. But I am really proud of my guys and all the people who have been working on this project, all the volunteers, all the marshals and everybody else from the organisation. It was quite a challenge for us, but we prepared for a long time and we prepared well. Some things were new for us, but we managed to do everything that was required. And we had nice weather!”

What was the biggest achievement?

“Picking the right special stages. We really wanted the rally to be different and to be challenging. We were joking not to have a ‘Micky Mouse’ rally. After 22 years in motorsport, I wanted to show that in Croatia you can find really difficult stages with a lot of different types of asphalt and grip. Michèle Mouton from the FIA said in one stage you could find all the asphalt rallies in the world with wide parts, narrow parts, uphill, downhill, fast parts, technical parts, all types of corners. Hearing that from a WRC rally winner and a key member of the WRC organisation made me proud because we understood what the WRC wants and what the FIA needs.”

As a WRC newcomer you faced several challenges. What was the biggest challenge you had to overcome?

“Finding the budget to run the rally and managing the spectator issue due to the pandemic. We could not sell tickets to fans, but we cannot ban people from entering private land and managing so many people to be distant was not easy. After a year of lockdowns, people were smiling, they were so happy, which gave us hope and a reason to be positive, not negative. Another challenge was the traffic. Zagreb has one million inhabitants, but we managed the traffic situation quite well and where to put the service park and headquarters. We did the best we could do.”

The FIA President, Jean Todt, spoke positively about the event but what feedback have you received from politicians in Croatia?

“We have received many letters, including from the President of the Republic of Croatia. They were all really proud and happy and said they would help our partnership much more in the future. They said we did a good job and the people who came from outside Croatia were really surprised. They thought the stages would be boring and did not know what they would be coming to. But they were happy and what is really important is that rallying and motorsport, which is in a small crisis in Croatia, has been given a spark to bring it up again like it deserves.”

How has the rally helped Croatia as a country but also the motorsport industry – has it created a legacy?

“We brought back rallying on front pages of the newspapers and it was the focus of the media. This was very important and we want to invest now in karting and some one-make cups with 10 or 20 cars of the same type. We want to bring people back in the game because there is a gap between my generation and the generation coming in. We have two really strong guys and one girl who are now 15 and 16 years old and I hope to get them in the Junior WRC in the future. We have a lot of ideas, but I probably won’t be happy as it might not happen fast enough, but we will work on it. If the WRC and the FIA wants to stay in Croatia for some more years then it will really help the tourism side and the economic side.”

Apart from the excellent stages and organisation, what else did the Croatia Rally bring to the WRC?

“As well as Croatia, we were very strong in the media in Slovenia, Bosnia and Herzegovina, Serbia, Hungary and also the Czech Republic and Austria. If you make a circle around Zagreb of 500 kilometres you have 80 million people living in this area. It’s not just Croatia but a region including many countries from where the WRC has been far away. In a normal year with no restrictions, I think we can come very close to the spectator figures that Portugal has had. We have the infrastructure, that’s the most important thing. We have six international airports within two hours driving from Zagreb. We have highways with very good connections and a lot of people living around us, including the people of northern Italy. Somebody living in Milan can come to Zagreb in five hours. If that same person wants to go to Sardinia for the rally there, they need to drive to Genoa and take the boat, which needs a lot more time than to come to Croatia. And it’s also cheaper in Croatia. In the future we know we can bring one million people to Croatia for the rally, we are sure about that.”

You mentioned there are some areas you would like to improve. What are those areas?

“We will need more people to supervise the movement of the fans in the stages. We have plans where to put the ambulance parking better and how to use the secondary roads better. We want to organise buses so people can come to the stages without blocking the roads. In the upper part of the organisation there are 27 people, but we need more people because it’s really, really big and tough work. We prepared well for this year, but I want it to be even better preparation the next time.”

Given the success of Croatia’s first WRC event what does the future hold, this can’t be a one-off, right?

“WRC Promoter and the FIA are very happy actually. They were surprised that the organisation ran smoothly and we didn’t have bigger issues. We met with WRC Promoter the day after the rally and there is a contract on the table. It’s now a question of finding the investment and I am meeting with the Croatian government and other departments. We really want to sign a contract for two or three years.”

Is the event fixed to an April date or can it move?

“With the tourism board and the Minister of Tourism and Sports we agreed a late April date is perfect for us. It’s a slot that Corsica used to have and we are very happy with this date because it’s before the high tourism season and it’s a fantastic and very cost-effective advertisement for the government. The inland has never been advertised as much like it was during the rally and it’s important to show all of Croatia to the world, not just the coast. This rally is a really good thing for the country.”

Are any route changes being planned for next year?

“We have many options, many ideas also. In fact, we have prepared 45 different stages that we can use and they are all very challenging, believe me. We have an idea to move Saturday’s leg closer to the coast because we had too many people in one place this year and that’s a concern. There are mountain stages 140 kilometres from Zagreb where you can see the sea, like the Sierra Nevada in Spain. We have more things we would like to show the world.”

As a former driver, how much did you wish you could have been competing on the stages last month?

“It was a struggle inside my soul all the time and it was difficult to watch the guys knowing you had to stay away from the cars and the stages. I was the Croatian champion, I did the Dakar two times, I did the European Rally Championship a couple of times, but I never did a WRC race, only as part of a gravel crew on Rallye Monte-Carlo one time. The only thing missing in my career is the WRC but, who knows, after many years of organising this rally in the WRC, maybe I will do one as a driver.”