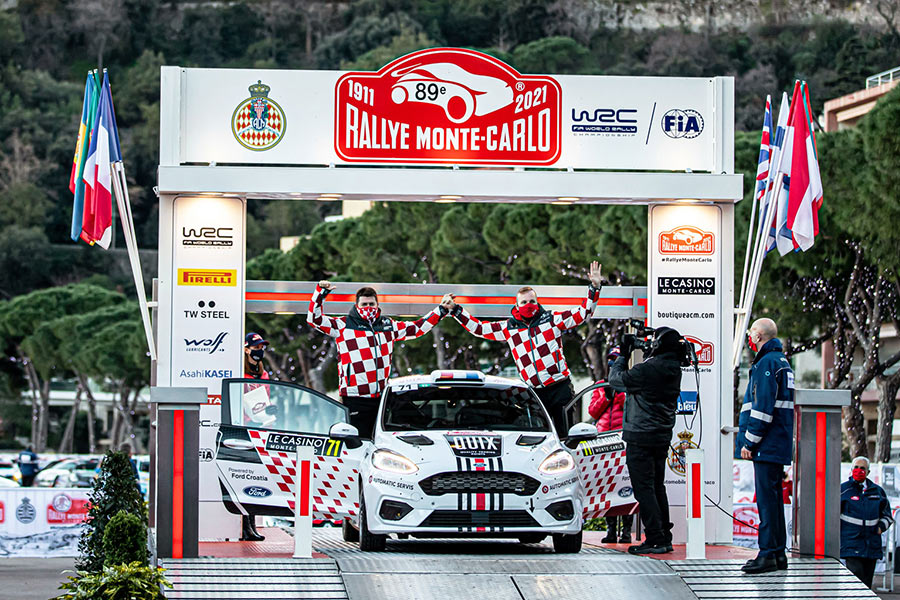 The new WRC season has traditionally started with Rallye Monte Carlo. The event took place despite organisers' problems with a curfew in France, which resulted in the programme being changed and the itinerary shortened. French crew Sebastien Ogier and Julien Ingrassia in Toyota Yaris WRC was getting around Frenc Alps the best to set a record-breaker, 8th victory in Monte. Second place was won by their team colleagues, Britons Elfyn Evans and Scott Martin with just 32.6 seconds left. Belgians Thierry Neuville and Martijn Wydaeghe in Hyundai i20 WRC were third. Ogier and Ingrassia set the best times in eight Special Stages. Two Stages were won by Evans and Martin, Neuville and Wydaeghe and Ott Tänak and Martin Järveoja, who opened the rally dominantly, but were disqualified on Saturday because they ran out of enough tyre to drive safely to the service

Croatian crew Viliam Prodan and Zoran Rastegorac opened their Rallye Monte Carlo well. After the first day they held extremely high third place among the 2WD cars. Unfortunately, as early as Friday morning, they had a puncture, costing them a loss of time and placement. They have finished Saturday's Stages in 55th place overall, which was not enough for them to drive on Sunday, reserved only for the leading 50 crews. In the end, they have placed 51 overall and seventh in the RC 4 class.

"We succeeded, we are happy and proud. Unfortunately, that flat tire cost us a place in the top 50. We are seventh in our class and we can be very pleased with the performance. The goal was the top five, which was possible if we had just a little better weather conditions on the road. On the Day one we showed that we are competitive, that Croatia knows and that can do high. The weather did not pamper us, and the catastrophic conditions during the day have culminated at night when the leech smashed the entire service park and did quite a lot of damage," concluded Viliam Prodan.