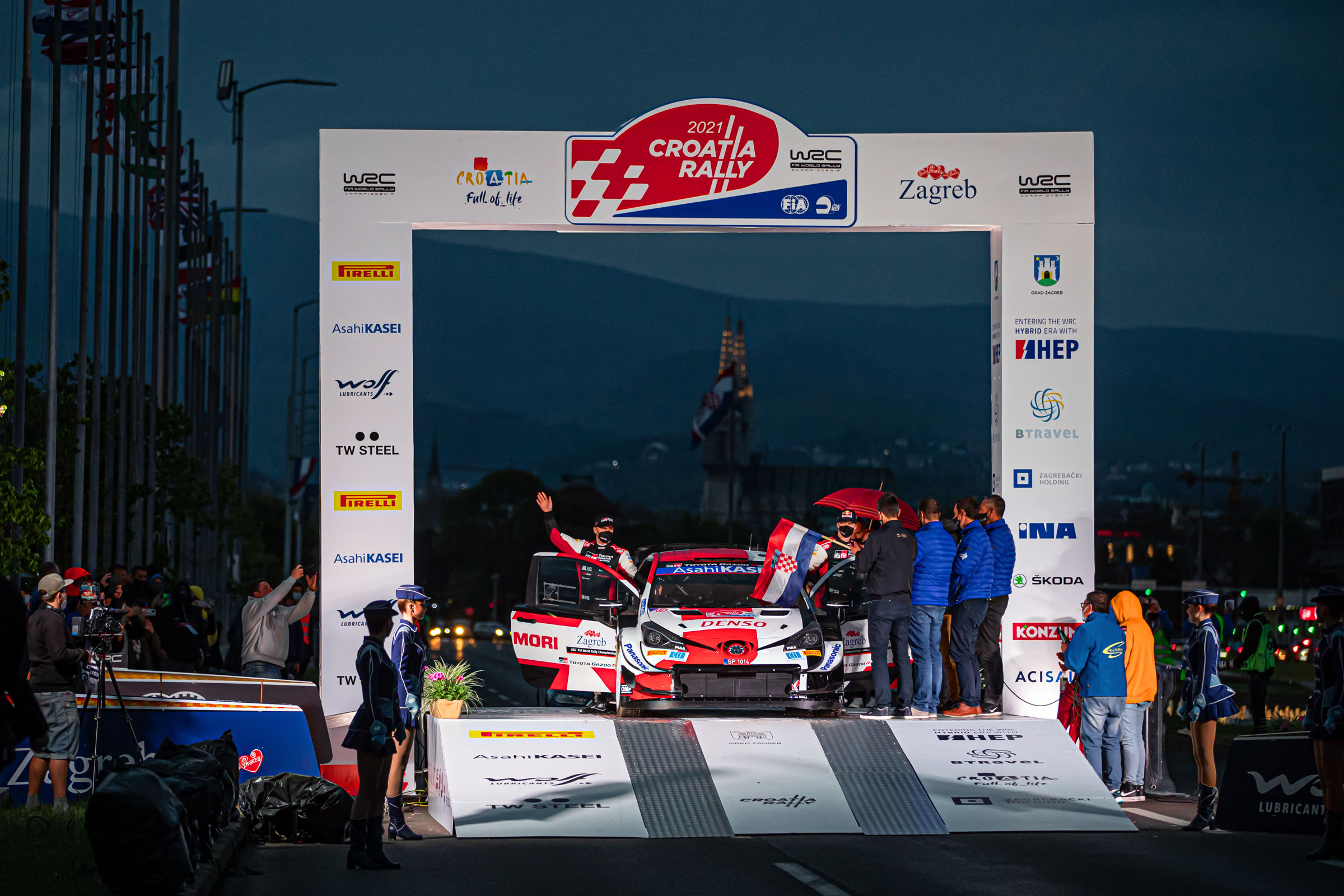 Under the setting sun in the capital city, the Ceremonial Start, which took place in front of the National and University Library, marked an historic moment as Croatia’s first FIA World Rally Championship event began.

Crews drove over the start ramp in descending order from 18:30 local time with the FIA Junior WRC Championship drivers up first followed by the WRC3 and WRC2 runners before the World Rally Car contingent took centre stage.

As is tradition on WRC events, crews were signaled to drive away from the start ramp by the lifting of the host country’s national flag, in this case the distinctive red, white and blue of the Croatian trobojnica.

Broadcast live on HRT in Croatia and streamed on WRC Plus All Live around the world, guests of honour included emissary of President of the Republic of Croatia, Željko Jovanović, the Deputy Mayor and Acting Mayor of Zagreb, Jelena Pavičić Vukićević; Minister of Physical Planning, Construction and Property, Darko Horvat, Minister of Tourism and Sports, Nikolina Brnjac and Parliament Speaker Gordan Jandroković.

Looking ahead to the competitive action, France’s reigning WRC champion Sébastien Ogier, part of the factory Toyota team, said: “We are all excited to be here, it’s a big challenge ahead of us with a lot of stages. All the ingredients are here to make a good show and an interesting race. We expect some tricky conditions tomorrow morning with the rain tonight, but we are here to fight for the win.”

Hyundai-driving Estonian Ott Tänak, the winner of the World Rally Championship in 2018, said: “It’s a pretty different rally with nice roads. The nature is really nice and it will be demanding for the drivers.”

Kalle Rovanperä from Finland, who is leading the FIA World Rally Championship after two rounds, was the final WRC driver to take the start in his Toyota. The 20-year-old said: “I’m feeling really good and it’s nice to be back in the rally car. New rallies are always nice but it’s going to be tricky and mixed conditions are difficult for me but it’s a good weekend to learn. You have to go by the feeling, but we'll try to be quick at the beginning and see what we can do.”

Swede Tom Kristensson, who graduates to WRC2 as the Junior WRC champion from 2020, said: “It’s a dream come true, the country and the stages are fantastic, it will be a really nice rally.”

Leg one begins with the 6.94-kilometer Rude – Plešivica stage from 08:39 local time tomorrow (Friday). It’s one of eight stages over a competitive distance of 99.82 kilometres scheduled for the opening day. Although dry weather is expected, overnight rain is forecast, which is set to further increase the challenge crews will face on the exciting Croatian roads.